Learn how to answer interview questions about diversity

No doubt we live in a diverse world. Richness meets poverty on every street corner, and so does a variety of viewpoints on politics, religion, or other serious topics. Egos clash when two people from diverse background start to talk, and typically there are more losers than winners in such battles. Is it then really better to have a diverse team in the workplace? That’s a question without an obvious answer.

One thing is obvious though. In our global economy, where people and goods move from one corner of the world to the other as easily ants in the anthill, and where love (and hate) knows no boundaries or limits, you cannot avoid diversity in the workplace. Working in a bigger corporation, you will always have in your team, or at least in your department, people of different colors, religions, ages, and of course different genders.

Asking questions about diversity, hiring managers try to understand how you will react when experiencing this diversity, and whether you can actually exist and thrive in such a team. Let’s have a look at 7 such questions. I will try to suggest how you should answer each one, in order to make a good impression and eventually land a job.

In your opinion, what is diversity and why is it important in the workplace?

Try to avoid pointing out a particular race, religious belief or anything similar in your answer. Say simply that diversity means that people from all walks of life meet in the workplace.

And hence they all have different experiences and life stories, and perhaps also preferences and goals, they bring in a variety of perspectives on each goal and challenge the team faces. As long as people respect each other and are not imprisoned in their own prejudice, they can learn a lot from each other in a diverse workplace.

Anything you say, try to praise the diversity. Because they would not ask about it, if you were supposed to work in a uniform team.

In your opinion, what problems does cultural or ethnic diversity pose in the workplace?

You have probably experienced them first hand. Someone ignoring you, just because you believed in some higher powers, or did not believe in them. People forming small groups within the team, having a cultural, ethnic, or religious bond. And then having petty (or even big) conflicts with other similar groups.

Diversity doesn’t have only advantages, just like uniformity. And you should not be an idealist in a job interview. Feel free to say that you may find it difficult to have conversations with certain people about certain topics. And you may also struggle to understand certain behavior, or thought patterns.

The same is certainly true for most people, and from such misunderstandings conflicts can easily arise, or even bigger problems. That’s perhaps the biggest challenge diversity poses in the workplace. 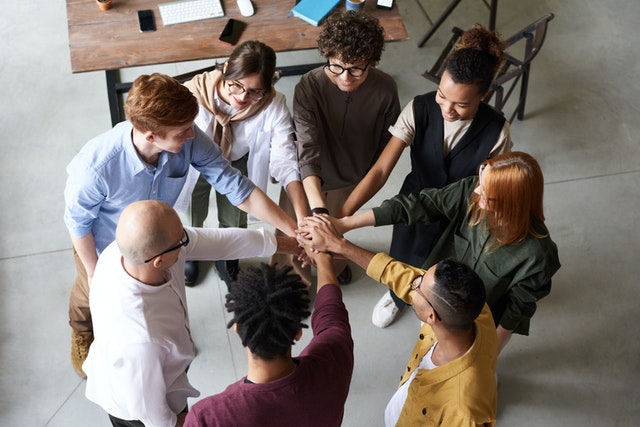 Imagine that a colleague starts talking to you about their religion. They try to introduce to you some thoughts and concepts, but in fact you believe a complete opposite is true. How will you react in such a situation?

Say that you will try to avoid sensitive topics altogether. Sure, religion (or culture, or politics) may be extremely important for some of your colleagues, and perhaps it matters a lot to you as well. But you want to build bridges, not fences. Hence you will avoid such conversations, and especially any overreaction if they start one with you.

Speaking about the particular situation from the question, you will simply thank them for telling you. But you will not agree or oppose their opinion. You will thank them and try to move to another subject, or simply end the conversation with saying “thank you”. After all you should work, not talk.

In no way will you start an argument. Because you understand that they come from a different background, they had different childhood, role models, everything. If you were in their shoes, you’d likely share their beliefs. And while you do not share them, you respect them and their right to see the world in the way they see it…

Tell us about a time when you struggled with diversity in the workplace.

It is completely normal to struggle, and you should not say that you have never struggled with diversity–unless you apply for your very first job.

Struggling is fine. The key is to show them that you eventually overcame the problems, and that they did not grow into something bigger.

However, once again you understand that they simply came from a different place, they had their own walk of life, and likely had to act in the way they did. And since you saw the value they brought to the team with their work, you eventually learned to respect them.

It doesn’t mean that you became best friends or anything of that sort. Maybe you even tried to minimize the number of interactions with the colleague in question. When you had to interact with them, however, you did it without prejudice, and most importantly you did it.

* Special Tip: Interview questions about diversity in the workplace aren’t the only tricky questions you will face while interviewing for a job in any Fortune 500 corporation. If you want to avoid “interview headaches”, and finally streamline your preparation for the big day, have a look at our Interview Success Package. Up to 10 premium answers to each difficult interview question will help you stand out in the interviews, impress the hiring managers, and outclass your competitors. Thank you for checking it out!

Imagine that you have a seat in an interviewing panel. The panel shortlisted three candidates–a young Hispanic man, a black woman in her forties, and a white man. They have the same qualifications, and all did great in the interviews. Who will you vouch for?

Do not get caught in a trap with questions like this one. You should not vouch for anyone in particular, especially not for the person who shares your ethnicity, or fits best to the existing team culturally.

Say that you will suggest another round of interviews. Perhaps a personality test, or one with many behavioral and situational questions, or even a role play–if that makes sense for a given position.

Since you embrace diversity in the workplace, you will not vouch for someone just because they seem to fit culturally in the existing team. On the contrary. If the panel cannot decide at the end, the interviews were probably not good enough. One more round is needed, so you can see who really has the best qualification and abilities for the job.

How do you make sure to remove bias from your everyday work?

This one is easier to say than do. In many situations we act without thinking, and our ego takes over. What’s more, it is natural for us to incline more to people who share our opinions and beliefs. But it doesn’t mean that we cannot take prejudice out of the equation, at least while working.

The following method works fine for me: I focus on the work of the other person, and not on who they are, or where they came from. As long as they meet their targets, support the team, take care of their duties, and do not start pointless conflicts with other people in the workplace, I do not really care where they come from and who they are.

The same applies to the opposite situation. If someone neglects their duties, or breaks the rules, I do not care whether they are my friend, support the same soccer team, or believe in the same God. I won’t protect them or their position in the team just because of our kinship…

In there a particular group of people you find it hard to work with?

You have two options for a good answer at this point. First one is saying that there is no such group. You respect everyone, and have experience with sharing the workplace with all kinds of people. You have never found it hard to cooperate with someone.

What’s more, you understand that they have a diverse team in place. You would not apply for a job with the company, if you were not ready to work in such a team.

The second option is picking a certain group of people, a or a certain characteristic–for example impatient people, autocratic leaders, people who always talk and never listen, etc. You can even explain why you find it hard. Maybe you pay attention to detail and are very precise in your work, which isn’t really possible if your manager is impatient and sets unrealistic deadlines for you.

Or you like to bring new ideas onboard, and even challenge the opinion of your superior–if you think they are wrong. It isn’t really possible while working under an autocratic leader, someone who has to always have the last word.

As long as you explain why you find it hard, and you do not point to a race, religion, gender, but to a personal trait or characteristic of a colleague, hiring managers will be satisfied with your answer…

Ready to answer interview questions about diversity in the workplace? I hope so! But you will face many other tricky questions–about prioritization, using logic, dealing with ambiguity and about dealing with other situations that can happen in the workplace. If you want to make sure that you’ll be ready for everything the hiring managers may throw at you, have a look at our Interview Success Package. Premium answers to 31 most common scenario-based interview questions (+ more) will make your life much easier on the big day.

Thank you for checking it out, and I wish you best of luck in your interviews!