Imagine there’s no country, it isn’t hard to do. Nothing to kill or die for, and no religion too. The famous words of John Lennon has not materialized yet in the world. There are countries and borders, and in many places a guard does not mind shooting a man dead when they try to illegally cross the border.

At the moment, almost 20,000 border patrol officers work in the US alone, most of them patrolling the borders with Mexico. Offering almost $70,000 annually in average, this career attracts a lot of young people who perhaps haven’t found their calling in some other sphere of life. Or who simply want to earn as much as they’d with a university degree, without having any.

Let’s have a look at some questions you may face in this tough interview.

Why do you want to work as a border patrol agent?

You should show an utmost commitment to protecting the US territory. The more patriotic your answer, the better they will consider it. Say that you understand the huge risk smugglers, dealers, terrorists or any other undocumented aliens present for US citizens, and for the country as a whole.

Since you love the United States, you feel a calling to protect your fellow citizens from these risks. What’s more, you are in a great shape, have excellent orientation and listening skills, can think critically and make quick decisions. Hence you consider yourself a good candidate for the job, and are ready to prove so in physical trials (fitness test, if you haven’t passed it already).

How do you imagine a typical day in this job?

This seems like an icebreaker question but it is not. You should show realistic expectations, or they won’t hire you. Say that you expect to be on guard during the entire duration of your shift. No games on your smartphone, no daydreaming.

You imagine patrolling your border area, going to and fro, either afoot, on a vehicle (can be anything from car to snowmobile), keeping your eyes open, watching for any intruders. Say that you imagine working in a team (which is always the case in this type of a job), and basically take care of any problems that occur on the line. 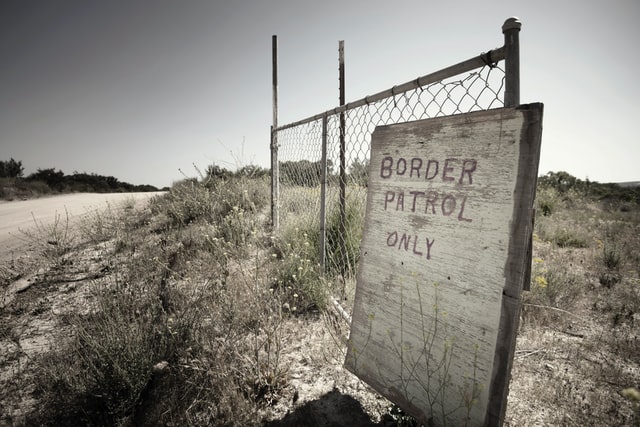 Imagine the following situation: An unknown person crosses the border and starts running. You are afoot, they are faster then you. You tell them to freeze but they don’t obey and continue running. Will you shoot them?

They may present you several scenarios in your border patrol interview, and this is one of them. Now I know that your heart (and maybe also your mind) tells you to avoid shooting. At the end of the day you want to join the service to protect people (US people), and not to kill someone. But these things cannot always be separated from one another…

The fact is that when they crossed illegally, and refuse to freeze, you should be ready to pull the trigger. And that’s what you should say in the interview. I suggest you to not fantasize about aiming at their leg or something similar. I mean, that’s what I’d say, because I cannot imagine ever shooting anyone dead (perhaps not alone shooting a gun), but I surely wouldn’t be hired in US border patrol interview…

They expect you to put your service and duty before your ideals and values. So if you want to get the job, ensure them that you’d shoot if they refused to freeze.

Family of five crosses the border. They realize that you spotted them and try to return back to Mexico. You manage to get hold of a father and a small child, barely one month old. The mother and other two children made it back, and now plead you to let the remaining two return, or at least the small child. What will you do?

This is another test of how serious you are about the oath you’ll make once entering the service. There’s not place for emotions in a job of a border patrol agent.

Ensure the senior officer that you will not let them back. On the contrary, you will follow the standard procedures, which means arresting the father together with the child, interrogating them and later deporting them (after their time in custody). The child will likely be send to a foster family, and then return back to Mexico with the father.

In some cases you may suggest giving the child back to the mother. At the end of the day a one month old child can hardly pose any threat, and it did not decide voluntarily to illegally cross the border. But you will detain the father in any circumstances.

Do you speak Spanish?

Speaking Spanish is a huge advantage, and in certain border areas it is also a job requirement. You may learn Spanish during your 6 months training, once they hire you, but it’s important for them to see that you have the capacities.

In some cases you may have to complete a language test, but they may also talk about your Spanish skills in the interview. I suggest you the following: If you speak well enough, you can even answer the question in Spanish. Or explain where you learned the language, how long you have been using it, etc.

If you do not speak Spanish, ensure the interviewers that you understand the important of the skill for the job, and are committed to learn it as soon as possible. You can also add that you believe to be a quick learner, and are sure that with your motivation and hardworking personality, you’ll learn the language in no time.

Do you prefer to give orders, or to take them?

This one is a bit tricky. Because you will both give and take orders in your border patrol job. When it comes to your duties, and orders in work, you should ensure the interviewers that you are ready to obey each command of your superior in rank.

That’s the sheepish attitude they look for in these jobs. No thinking, no morals, no protests. If a senior officer tells you to do something, you will obey their command. Such working environment doesn’t fit most people, but it probably fits you when you decided to apply for a job of a border patrol agent.

But you can also add that you are also ready to give orders--to people in the border area, people who try to cross, or already crossed the border. Your orders will be rather simple in this case--freeze, lie down, show me your hands, stop, etc. Anyway, ensure the interviewers that you are ready to use them anytime your job requires it.

Other questions you may face in your border patrol agent interview

* You can also download the full list of questions in a one page long PDF, print it, and practice your interview answers anytime later:

Getting to border patrol is far from easy. You have to pass several tests (fitness test, language test, psychometric test), and do well in a tricky interview, typically led by a group of senior officers.

More than about anything else, they will ask you about your attitude some scenarios, situations that do realistically happen in the job.

Are you ready to kill someone if they cross the border and do not obey your commands to freeze? Will you take a right action always, following the rules, or will you let emotions interfere with your work? And how will you deal with this or that person or tricky situation?

Read the questions once again, together with my hints, and write down a short answer to each one. And if you aren’t sure what you’d do in some of the situations, tell them that you’d follow the rules, to the point, and that you are sure you’d learn about them during your training program…